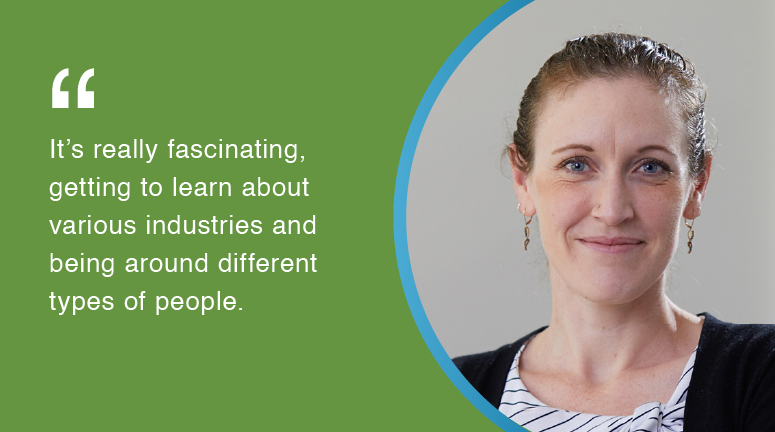 As a Vice President and Commercial Relationship Manager at Oregon Pacific Bank in Eugene, Megan Horvath meets businesspeople from all walks of life. She finds it fulfilling and educational hearing about supply chain concerns, labor disputes and price constraints directly from those closest to the issues.

“It’s really fascinating, getting to learn about various industries and being around different types of people,” Megan says. “I work with contractors, medical professionals, manufacturers, and I learn a lot about these various businesses. It gives me a better, deeper understanding of how the economy really works.”

Megan has been with OPB since 2019. She didn’t set out on a career path with the intention to go into banking, but she’s glad she did. An internship that introduced her to the financial industry is what piqued her interest and launched her career in community banking back in 2006.

“There are lots of diverse opportunities here. We’ve got quite a lot of economic activity in Eugene,” she says.

She first moved to the area in 2004 to complete her degree in finance at the University of Oregon after attending college in Hawaii, where she was raised on the Big Island.

Visitors to Hawaii, she says, consider it paradise, but they often don’t recognize that its tourism economy contributes to a high cost of living for full-time residents, which can be challenging for families. As a child, she used to travel back and forth to the mainland and spent summers in California. It wasn’t until she became an adult that she began to appreciate the perks of life on the islands.

Megan makes trips to Hawaii to visit family but enjoys the life she’s built here. Eugene is the perfect size, she says. “I like that it’s a smaller city than say, Portland.”

She and her family own property in Creswell, which makes it possible to enjoy rural life and a short commute. “I grew up in a very small town, so I don’t do well with traffic,” she says.

A few years ago, her family started camping. They take their trailer to the mountains, camp and kayak, she says, and her children love it. “Camping has been our thing. We enjoy it quite a bit — just going out, being somewhere else, getting away. There’s a lot nearby that we can go do.”

Other than camping, Megan enjoys working on the property, which includes tending to chickens or her garden. “I wouldn’t say I’m good at either,” she says with a laugh.

Megan also volunteers her time at community service organizations. She worked with St. Vincent de Paul Society of Lane County for nine years. “It is an amazing organization,” she says. “It was wonderful to learn about all the facets of what they do. And it was really impactful for me to be able to help however I could.”

Volunteerism is another example of how her career has introduced her to people in the community who are making a difference. Megan currently serves on the Eugene Ballet Board of Directors as treasurer.

“I was never into the arts growing up, but I was blown away by this organization. I just kind of got swept up into it, and I appreciate the effort they put into the arts in our community.”