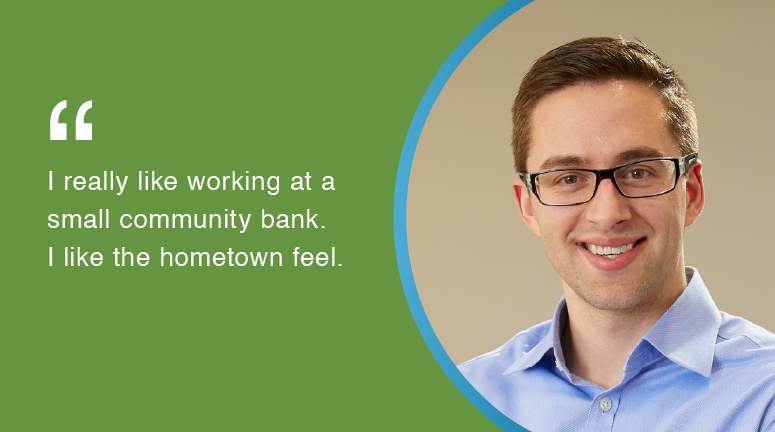 Take his interest in beekeeping, for example, which began in childhood. “I wanted to be an entomologist,” he says. “I loved bugs as a kid.”

When he got started, he didn’t know much about it. He made a lot of mistakes. “You wouldn’t believe how many mistakes,” he says. He got stung, which is especially bad because he found out that he is allergic to bee stings. “My whole arm would swell up.”

But he learned from his mistakes and was determined enough to seek some training through the Oregon State Beekeepers Association. He also invested in a thick suit to avoid getting stung.

It was all worth it. He’s become such an expert that he now tutors aspiring beekeepers.

“There’s nothing like having fresh, local, Willamette Valley honey,” he says.

When it comes to his banking career, Nelson is just as committed to giving it his all. It wasn’t long after graduating from the University of Oregon Lundquist College of Business in 2012 that he entered the banking world.

“I always had a dream of getting into banking because I’m a numbers guy,” he says. In 2018, he joined Oregon Pacific Bank, which was a great fit. “I really like working at a small community bank. I like the hometown feel.”

As a Commercial Relationship Manager, he likes to connect to people and understand their needs while finding ways to help people grow their business. Treating people with respect is the key, he says.

“I like working with people, and I like numbers,” Nelson says. “Being a commercial lender ties those together.”

When not at work, he enjoys being a new father and spending time his family. He also likes to travel, run and watch sci-fi and sports. He hits the bowling alley when he can, too, which is one of his other passions. He has yet to roll a perfect 300-game, but he’s getting awfully close — he once scored a 287.

Whether it’s at the alley or at the office, Nelson gives it his best and tries to have fun in the process.

“My favorite thing about working here is being able to work hard,” he says. “We like to work hard for our clients, but we don’t take ourselves too seriously.”