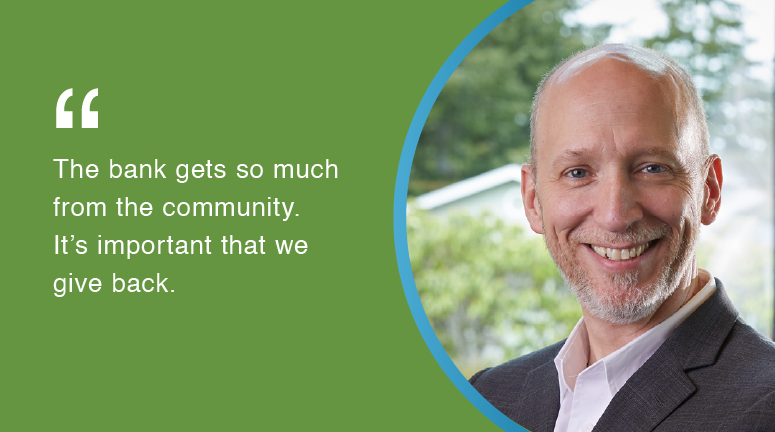 For Ron Green, his career has always been about hitting the right notes.

He’s successfully led Oregon Pacific Bank as President and Chief Executive Officer since 2013. Before his banking career, he was a professional trumpet player, performing with various local bands and producing studio work for TV commercials and soundtracks. He even performed periodically with the Portland Opera Orchestra.

“Music has always been my passion,” he says.

The experience he gained as a bandmate has also served him well in banking. Leading our bank is a team effort, Ron says.

Even during periods of sometimes challenging economic conditions, OPB has thrived during his tenure. As banking competitors have merged in recent years, OPB has expanded to include five branches, most recently in Eugene and Medford. In addition to its headquarters in Florence, OPB also has branches in Roseburg and Coos Bay.

“We serve customers, community, staff and shareholders,” Ron says. “Our focus is to ensure OPB can remain independent — independence allows us to control our destiny, as to how we best serve the community and employees.”

Part of his focus is to maintain and grow OPB’s reputation as a great place to work and ensure that employees feel valued and appreciated. “I enjoy the relationship with our staff and creating an organization that people will be proud to work for,” he says.

OPB staff members share that feeling of pride, which is reflected in their work and in the communities they serve. If you were to scan the rosters of civic and nonprofit organizations across OPB’s service areas, you would see the names of many Oregon Pacific Bank staffers.

Ron takes a lot of pride in the atmosphere of community service that he’s promoted during his time at OPB. He encourages local pride and participation because it tends to have a domino effect, boosting both employees and the community.

“I’m most proud of the way we’ve created a culture of service,” he says. “The bank gets so much from the community. It’s important that we give back.”

As leader of the company, Ron does a lot of volunteer work himself. He began serving on the board of the United Way of Lane County in 2019. The organization has been busy of late supporting initiatives such as wildfire disaster relief and addressing racial inequity.

“It’s a very rewarding position to serve on that board,” he says. “United Way is just extraordinary.”

He is also a supporter of the Boys & Girls Clubs of Western Lane County, which makes its mission to provide a safe place for children and teens to learn and grow.

In addition, Ron serves on the PeaceHealth Peace Harbor Medical Center Community Health Board, which he joined in 2014. Ron also supports the local business community by staying active with local businesses and calls himself a proud member of the Rotary Club of Florence. “I love Rotary organizations and what they do,” he says.

He just ended serving a four-year term on the Siuslaw Valley Fire and Rescue board and he serves as chair of Community Banks of Oregon, which represents banks that have their headquarters in Oregon.

Ron enjoys supporting the community, including the town of Florence, which he’s glad to call home. He was recruited to join OPB in 2007 as a Chief Credit Officer and the move to Florence was an easy choice. Drawn by the moderate climate and the small-town charm, he and his wife had always loved the community and had dreamed of living on the Oregon Coast.

Ron had been very active in the arts community in Portland, so he admits to a bit of a “culture shock” when he first moved to Florence. But he says the quality of life and ample recreation opportunities were “more than a fair trade-off.” He and his wife still enjoy trips to Portland and Eugene to support the arts.

He and his wife both grew up in Portland, which is where he started his banking career in 1989. He graduated from the Pacific Coast Banking School at the University of Washington.

In his personal time, Ron enjoys spending time outdoors and taking walks on the beach. And he still has a strong love of music, even if his professional musician days are behind him. Trumpets are demanding instruments and playing at a professional level requires daily attention, he says.

“I’ve kind of become a former musician,” he says. “Now my trumpet sits on the shelf.”

There is another interest of his that has become his new passion, however. As grandparents, he and his wife travel as often as they can to see their grandkids.

In the meantime, Ron will continue to enjoy his leadership role at Oregon Pacific Bank while encouraging a strong atmosphere of community service. He says that kind of work benefits us all and generations to come.

“The success of our community depends on organizations that help those who don’t have the same opportunities as the rest of us,” he says.