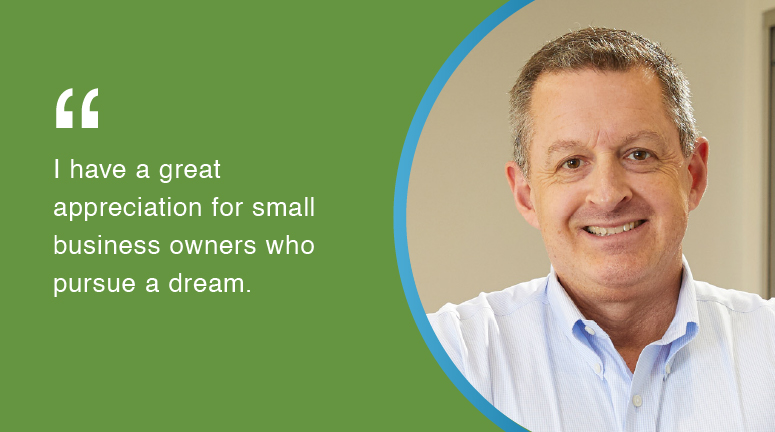 Whether it’s with Oregon Pacific Bank or through his work with nonprofit organizations, Troy Reichenberger enjoys helping people achieve their dreams of financial success.
As a Team Leader, Commercial Relationship Manager and Senior Vice President at OPB’s Eugene Branch, Troy works with companies of all sizes to help them develop business strategies.

“What I like about the job is the mix of having interaction with business owners, learning how they operate, and analytical thinking,” he says. “I have a great appreciation for small business owners who pursue a dream.”

Troy fulfilled a dream of his own when he returned to Oregon in 2006. He was raised in Ashland but later spent time in California and North Carolina, where he earned a Bachelor of Science in Business Administration from the University of North Carolina.

After working in the airline industry, he shifted to finance before he and his wife decided to bring their children home to Oregon, settling in Eugene, to be closer to family. After spending some time at two other banks, he joined our team in 2018.
Troy appreciates the size of Eugene and its economic opportunities, in addition to its central location, being close to both the coast and the mountains. In his off-time, Troy enjoys golfing, kayaking, hiking and watching the Ducks, as well as getaways to the coast or the Bend area.

Troy also spends time assisting DevNW, which was formerly part of the Neighborhood Economic Development Corporation (NEDCO). He was on the NEDCO board for six years and has been a member of the Rotary Club of Eugene.

He’s also a board member and treasurer for Community Lending Works, a sister company to DevNW. Through funding programs, loans and financial education, the organizations aim to help underserved markets, opening doors for local individuals and businesses as they work toward financial stability.

“It gives me some personal reward knowing that we’re really trying to help people get on their feet and build a future,” Troy says.