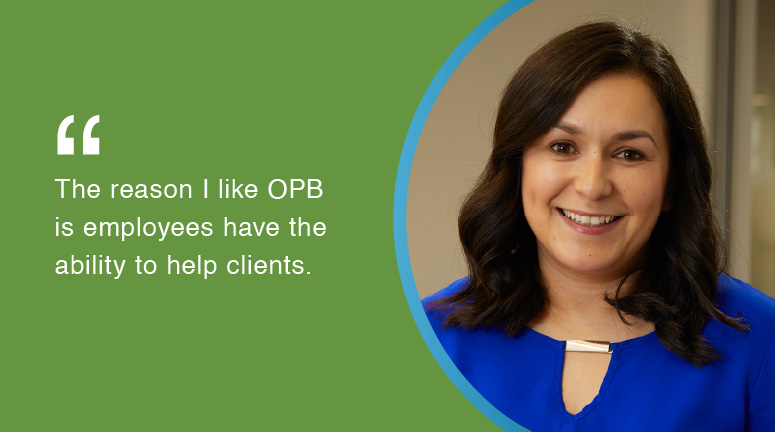 Marisol Salgado got an early start to her banking career. While interviewing a bank manager as part of a job-shadowing course in high school, she was offered a bank teller job on the spot.

After more than 20 years, she says banking has held her interest because of the people she works with and the customers she meets.

“It’s the only thing I’ve ever done,” she says. “I enjoy helping people.”

Marisol joined Oregon Pacific Bank in 2018. She’s an Assistant Vice President and manages our Eugene branch. A few years after starting her career in California, she returned to her native state and has worked in customer service and leadership positions at several banks in Oregon.

Throughout her career, she has enjoyed working with members of the Spanish-speaking community who often face language barriers in the financial industry. Even when working at branches where most customers spoke Spanish, Marisol has often been one of the few Spanish-speakers on staff. While the industry is making inroads, she says, there is still much to do, and she appreciates the efforts of OPB to make all customers and business owners feel they are represented.

“It comes right from the top,” she says. “It just feels extra nice be able to help people who have that language barrier to get the services they need.”

Marisol is also involved in Leadership Eugene-Springfield program, a joint effort of the Eugene and Springfield Chambers of Commerce to foster civic leadership. She looks forward to being more involved in the community for years to come.

Marisol says she enjoys living in the Eugene area, where she and her family have made their home since 2016. She was born and raised in Hillsboro and says that after living in California and the Portland area, Eugene has a nice “small town” atmosphere.

She enjoys visiting family as often as she can. She likes to get outdoors, go hiking and plan regular getaways to the coast, where her daughters love to ride ATVs.

Marisol says she’s glad her banking career has led her to Oregon Pacific Bank, where she appreciates the flexibility employees are given in serving customers.

“The reason I like OPB is employees have the ability to help clients,” she says. “We’re better able to serve our clients and our community.”